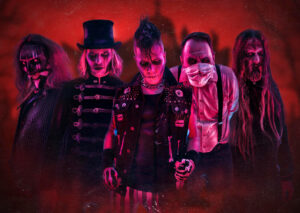 The Other is considered to be Europe’s most famous horrorpunk-band. Gigs at some of the biggest alternative festivals in Europe such as the Wacken Open Air, Amphi Festival, M’era Luna, Summer Breeze, Wave Gotik Treffen, With Full Force, Endless Summer, Ruhrpott Rodeo and countless other festivals support the label that the press gave to the horror-fourpiece. Shows with Alice Cooper, Bela B. (of Germany’s Punk-Rock superstars Die Ärzte), The 69 Eyes, The Cult, Ignite, jennifer Rostock and tours with Misfits, The Damned, Balzac, Christian Death and Wednesday 13 added to the success of the grave-rockers and are proof, that The Other appeals to Punk-Rock, Goth- and Metal audiences alike. The band played endlessly all over Europe in the past years and even toured the USA twice and played shows in Russia.

All scene-magazines covered The Other, even the daily- and yellow-press wrote about the band and their videoclip for the song “Lovers Lane“ featuring adult-actress Leonie Saint. Additionally, the band was even extensively featured on MTV Masters, French-German cultural TV-channel ARTE’s music show „Tracks“, RTL Television and SAT1‘s documentary series „Planetopia“. Their biggest TV appearance was a live performance of their 2012 song “Skeletons in the Closet” on stage in the show of Joko and Klaas, Germanys most popular TV-hosts.

The Other’s first comic book „Tales From The Other“ became a big success as well and was followed by a second comic book entitled „Der Fluch des Kultes“, published by Panini Comics (Marvel, DC, Star Wars) in 2012. In 2010 The Other signed a deal with worldwide renowned Rock label SPV (Judas Priest, Alice Cooper, Mötley Crüe, Motörhead…) and cooperated with producer Waldemar Sorychta (The Gathering, Lacuna Coil, Moonspell, etc.) to deliver their breakthrough album „New Blood“. Its mixture of dark Punk-Rock with Goth- / Metal influences and haunting melodies received outstanding reviews in all genre magazines. The band’s fifth album „The Devils you know“ was released in June 2012 in Europe and July 2012 in North-America.
„Fear Itself“ – the band’s sixth album – introduced new bandmembers and now for the first time in the band’s history featured two guitarists. „Fear Itself“ was in parts a return to the band’s Punk roots and was followed by a new contract with Drakkar Records, the Punk Rock /Alternative sister label of Germany’s AFM.

The first album for Drakkar Records and the seventh album for The Other is entitled „Casket Case“ and features 16 songs. The album will be released on October 20th, 2017 on Digipak, limited Gatefold double LP with a vinyl etching on side 4, and as a limited coffin-shaped case with the CD, a fan-scarf and autographed postcards. The following headliner tour will take The Other through eleven cities with a grand final in Cologne at the legendary Live Music Hall (1.500 capacity).